Some Weaknesses of Communism and Karl Marx's 'Work' 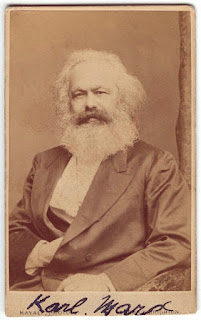 One reason why Karl Marx is so revered is, because 'intellectuals' don’t realise that he based his political philosophy on the work of the philosophers of his day, as well as those which came before. Some aspects of these philosophies are now out-dated and have been superseded by modern philosophers who came after.

Most academics are not aware of this, because the works of Marx are so involved and complex, that they do not easily lend themselves to a single individual’s understanding (even for Marx himself!). So they simply don’t go into depth on their own or they trust what others say! They need not do any real thinking on their own. They must simply adopt this weaponised and cancerous perspective to see themselves as part of a larger idea and to create and discover themselves within it.

Another reason for the continued adherence to his political philosophy is that it provides those, who are addicted to control and collectivism, to maintain their efforts to dominate and subjugate those, such as we, who do not belong to their hegemony: the banksters.

While these very banksters control to what extent and which corporations fund research, they continue to put their money where their belief structure lies.

Here are two examples of how Marx was in way beyond his depth regarding philosophy in particular and history in general:

The Marxist dialectic was adapted from Hegel’s Dialectic and weaponised via historical materialism. It purports to be a reflection of the real world created by man, but it is faulty. His version of history was being perverted by a collectivist mental lens.

Also, the dialectic has been found to be incomplete. There are other mechanisms responsible for change as well determining truth of validity claims. Modern philosophy can literally ‘sink his ships’ on every principle he re-defined and/or incorrectly understood.

I must add that I have been examining his ‘work’ over many years now. I have also compared it to the work of others such as Henry George and Lysander Spooner among many others. My work is going to reveal how childish, despite how involved/complex, that mind of Marx was.

There will come a day when adherents to Marxism will be ashamed of themselves. They will finally see that they have allowed themselves to be indoctrinated (duped) into a weaponised and destructive system that, had they thought through it in light of other philosophers, would not have ever taken hold.

The premature globalist parasites have injected into our cultures that Marxism is ‘intellectual’ and ‘sophisticated’, because it affords them with an ideology capable of allowing the destruction of present social and cultural constructions without reservation. Why should we concern ourselves with out-dated cultural and social entities when utopia awaits for us?

They subscribe to the false meme: "The ends justify their means." when, in actuality, the means determine their ends. Destructive means... destructive ends.

Marxism is a means for the tyranny of a few to be made palatable to the masses. The very same families who were responsible for Imperialism are those now aiding and abetting the invasion of Europe as well as the social engineering being worked upon our societies and cultures.

My life would be a success in my own eyes if I only achieve this goal, but my life’s work has something much greater in meaning.